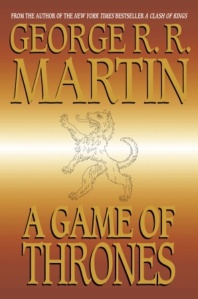 Winner of the Locus Award for Best Fantasy Novel, 1997.

Shortlisted for the Nebula Award for Best Novel, 1997.

Shortlisted for the World Fantasy Award for Best Novel, 1997.

“Wind and words. We are only human, and the gods have fashioned us for love. That is our great glory, and our great tragedy.”

We’re not in Middle Earth any more, baby.

Don’t get me wrong — you’d be hard-pressed to find a more earnest Tolkenian stalwart than your humble reviewer. I begin with Tolkien, not to disparage or dignify Martin by comparison, but to posit that both men have crafted worlds beyond measurable value in the genre of adult fantasy.  A Game of Thrones, first in the A Song of Ice and Fire saga (and here is a series that deserves such a title, not other current pretenders that feature incandescent undead and perpetually blue-jeaned werelings), is worthy of a place on the loftiest pedestal you polish for your high fantasy, for reasons both dirty and divine.

Winter is coming. These are the the watchwords of House Stark, proud and patrician defenders of the North of Westeros and rulers of Winterfell, its ancient castle fortress. Presided over by principled Eddard Stark, his loyal wife Catelyn and their five children, Winterfell enjoys a lull of peace before the arrival of Eddard’s best friend, the King of Westeros’s Seven Kingdoms, Robert, who presses the former into becoming his ‘hand’, his second in command and principal advisor, to rule at his side in King’s Landing, many leagues south of Winterfell. Eddard’s beloved bastard son, Jon Snow, seeks his own livelihood elsewhere, denied the companionship and security of a permanent place in the Stark familiarity he’s known his entire fifteen years. He rides even further north, to fringes of civilization and the Wall, a massive ice bulwark spanning 300 feet long and towering 700 feet tall, hewn by Brandon the Builder to defend Westeros against the threat of wild creatures both known and beyond human imagination. Jon “takes the black”, swearing his fealty to the Night’s Watch, a band of ebony-clad soldiers charged with the protection of the Wall against every possible threat. Meanwhile, across the narrow sea from Westeros, wily, dispossesed Viserys Targaryen, last male survivor of the royal line King Robert slew, dreams of nothing but regaining the crown he deems his birthright. He sells his young sister Daenerys in marriage to fierce Dothraki warlord, Khal Drogo, in hopes of attaining a vast legion of horsemen to recapture the kingship at his command. These concerns involve the three-pronged storyline of A Game of Thrones, but they are a mere glimmer behind the bedezined curtain of plots, subplots, and tributaries of storylines stemming from even these.

Two major criticisms I’ve read of A Game of Thrones is that it’s appallingly overconcerned with the sociopolitical intrigues of the monied elite, as well as guilty of favouring a decidedly misogynistic slant. Given that the titular game refers to an ongoing series of intellectual manipulations and sleight of hand coercions for ruling power, I cannot see how the selfsame intrigues would not come to the fore. It is worth noting that it is not always the monied elite players of the game who yearn for power, however. All have aspirations, and the aspirations of all are keenly documented, not merely those of royal bloodlines. The concerns of the peasantry, the commonfolk, the ‘little people’, are admittedly less prevalent, but they do occur. They oil the machinery of the grand conquests; they litter the battlefields of bad decisions. The fact that they do not speak as much surely says a great deal about them, the position they hold in society, and the stratification of society itself. When they do speak, which is not, it ought be noted, a rare occurrence, merely a less frequent one, it is always believably, and in service of plot strengthening, theme reinforcement and general expository goodness.

As for the lack of strong female characters in the novel, yes, there are several less of them than their male counterparts. George R. R. Martin’s prerogative in writing of more men in positions of power than women can hardly be called a misogynist’s work, if this is the sort of creative world he wishes to establish. Refusal to read the book on these grounds seems like lazy feminist pointscoring that owns no basis in logical assertion: would a novel densely populated with women warriors and leaders offend the rights of men? I’m all for reading about the ascent of gorgeously-sculpted women in literature and life, and the stories of Daenerys Targaryen and Arya Stark are well worth the stories of ten less lovingly-limned leading ladies.

A densely worded world needs vibrant, achingly alive characters to populate it, else all its lavish description has been for naught. Martin moulds such figures in abundance, and charges them with the telling of the thousand and one tales within these pages. The narration of the novel is entrusted to eight principal players (excluding the hair-raising prologue, delivered to us by minor figure, Will). They are:

The utter lack of authorial omniscience in the narration makes each account from each character sing all the livelier. One becomes so engrossed in the tale told, for instance, in Tyrion’s chapters, which are brimful of well-executed wit, wordplay and self-deprecating humour, that to see them come to a close often elicits a frown of annoyance. Switching from Tyrion’s narration to Arya’s, especially after being left on the crest of a dramatic, jaw-dropping development, or a particularly arch comment from The Imp, seems frustrating for the first page, until Arya’s pugilistic perseverance entirely wins us over. We part ways with her at the end of each of her chapters, musing ‘ah, if I only had a daughter/sister like that… why can’t I be more like Arya, anyway?’

It is in this respect that Martin’s cast reminds me of Tolkien’s: for the archetypal luminescence by which readers best enjoy identifying themselves. There is no underdog who can read Tyrion’s half-bitter, half-humoured introspectives without at least a tinge of knowingness, just as no mother, made frantic with desperate love for her children, can deny that they, like Catelyn Stark, would not cut their hands to the quick, to save a slumbering son. The personages within A Game of Thrones could be used to construct a tarot deck of emblematic figures, each character occupying a central or minor slot. What tempers this universal accessibility, however, is that none are drawn with too thick a brush in one overarching quality. Tyrion, for instance, may distinguish himself from the ruthless egoism of House Lannister and his siblings, but his penchant for exquisite enactments of cruelty makes for spectacular reading. Viserys Targaryen rules over his half-crazed compulsions and his little sister with a mercilessly iron fist, but Daenerys remembers him for his passing peaceful jaunts as well, for his quietly hungry boyhood dreams of a better life for them both, in a kingdom across perilous waters. The impression is sustained in nearly everyone we meet in these pages, of a life preceding their appearance in the narration, a life with all its innumerable associations, foibles and moral complexities. Reading characters who are less richly envisioned, less convincingly wrought, will be all the more telling for having read Martin’s, here.

Neither is the folkloric beating heart of the world of Westeros, and all that lies beyond it, treated with any less attention to detail. A Game of Thrones is prefaced by an exquisitely rendered map, pure cartographic delight in the tradition of Tolkien’s own storytelling legacy. There is history in every fireside account, in every mug of ale passed between hands in each tavern of ill repute. There are gods, both old and new, the ancient weirwood deities of the Godswood, beneath whose heart tree Eddard muses for guidance and polishes his greatsword of executioner’s blood; the pristine new gods of the septons and septas, the star spirits that the Dothraki believe to be the fallen dead. The novel is tapestry, a liberal and forceful commingling of belief systems as rich and dense as freshly shed blood, as deep as the darkest magic.

One could do much worse than to wander from Middle Earth into Westeros.