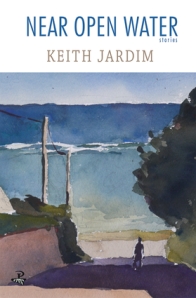 Longlisted for the 2012 OCM Bocas Prize for Caribbean Literature.

You should never underestimate good short fiction, I thought, dragging the back of my hand across my stinging eyes. I had just read the first story, called “In The Atlantic Field” of Keith Jardim’s collection, and already, just like that, the serenity of my day had been stolen. I put the book down, took decisive steps away from it. I walked around the house, and when I returned to the book, it was with mild resentment (the good kind), mixed with greater parts curiosity and the salted wound of unscripted emotional response. I read on.

The twelve stories in Near Open Water invite our considerations (and yes, our tears, too) on loss and excess, each one set or linked closely to a vast body of water. In “In The Atlantic Field”, a young boy and his mother go for a longer-than-usual drive along the north coast road. Nicolas meets a beautiful young woman and learns both less, and more, than he wants to know in “The Marches of Blue.” “The Visitors” who come to Trevor’s father’s house are intent on finding something to satisfy their motivations. In “The White People Maid”, Cynthia meets a legendary figure after witnessing a gruesome pharmacy robbery. A man and a woman play with dangerous intimacies before a wild beast’s enclosure, in “In the Cage.” Complacent Gene and frustrated Anna travel to Georgetown by Essequibian boat in “A Landscape Far From Home.” “Caribbean Honeymoon” tells the story of quite a different couple on quite a different, crueller journey. Nello, the narrator of “Fire in the City”, muses on the directions his own life has taken. A man takes a drive whose destination seems both grim and unclear, in “Kanaima, Late Afternoon”. Roy and Fiona visit the zoo’s most regal occupant, learning more about its origins from an eccentric source in “The Jaguar”. “Night Rain” tells a seemingly-bare story of a man who visits a woman in bed. The collection concludes with its titular piece, “Near Open Water”, in which a journal is kept, a dream is had, and more than one frightful thing is embedded into a consciousness, for good (or not so good).

Perhaps some of these descriptions strike one as would blurry, indistinct landscape art, the sort that adorns dental waiting rooms. If there is vagueness in the detailing here, it is because detail can linger where you least expect it in Jardim’s work. Neither the reader nor the narrator can be guaranteed of any answers that will illuminate. In “The Marches of Blue”, after a string of seemingly-unconnected encounters with other islanders, Nicolas turns to his severe grandmother for the mapping-lines that will make sense of their stories, receiving further uncertainty for his pains. What she does share is coloured in with a kind of resigned, tranquil bitterness.

“His grandmother said: “The sweetness of the very young, to think that. But age dries up things in you, even poetry, like this damned island. Damned because everything that has ever happened here over the last five hundred years was never meant to happen, was a mistake, wrong. […] I’m an old woman now, and I don’t want to drag up the past. It’s too tiresome. I want to tend my garden and die in peace.”

With uncertain provenance, guided by ambitious and destructive historical sculptors, how can any path we reasonably take in Caribbean waters seem straightforward? In this way, the stories interrogate a time that perhaps has always been marred by fracture, split on more fault lines than lends comfort.

There is a certain savagery to unchecked human appetite, to the places it can lead. In these stories, personal pleasures are pursued recklessly, consequence a distant island blurring out of focus. “Total madness” is the way Nello describes a club scene in “Fire in the City”, adding “like people only want to dance their life away. Not just the night, eh. Their whole fockin’ life. And to hell with the damn island.” Some characters are barely bemused by the curious, inelegant politics that govern survival. Roy explains to Fiona, when she presses him for a detail he is either unwilling or unable to provide, that “The rumours are there. This place is loaded with them. It’s a way of life here. How can people not make assumptions? It’s how the island amuses itself…”. For others, like the young writer in “Near Open Water”, the pursuit of a contemplative interior life, set against a vivid natural backdrop, can mask the fear of things committed towards violent ends, things guessed at and unknown. He tries to keep a journal against such thoughts, but a voice  both cautionary and seductive encroaches on his pages, with dire warnings that hint at his fate.

“This matter of fate, and the uneasy part of yourself – you leave it abruptly. No reflection whatever; you told me that’s dangerous, that’s what’s wrong with the world – the neglect of history, and of selves, even. And here you are, guilty of it, refusing to take your own advice. Or is it the melancholy the sea brings to most of us? […] It seems an act of destruction has begun…”

In spite of this questionable interpersonal canvas, the land and water offer, if not outright solutions, then a measure of solace, of feeling oneself linked to something other than a daily gamble with rigged odds. Jardim’s prose reveals the places we inhabit in stunning, achingly grateful ways. The young boy who frolicks on the north coast littoral in “In The Atlantic Field” experiences a suspended moment of raw glory.

“He’s in the haze, happy in the light. The wet rocks are dark and glinting. He throws the spear at them; it breaks in two and falls into the bright surf. Among the rocks there is one with a smooth, triangular slate surface angling at him. He finds a quartz-crystal stone and begins writing the words: I am the first person here.”

Unfettered love for the land and its non-bipedal citizens grants us access to people who cherish existence differently, operating off the grid in quirkily reassuring ways. The itinerant, multi-wristwatched Dr. Edric Traboulay, who favours Roy and Fiona with smatterings of his wit, vast knowledge and naturist’s sympathies, reminds us that the truest names for jaguars, even caged ones, aren’t the cutesy handles affixed to official signposts. The verdant thickets indigenous to islands; the mangrove’s mystery; the sea’s brutal, tender refrain: all are suggestions on how we might live, or alter our living. The dearth of characters like Traboulay suggests that we are immune, or too far removed, to hear or respond authentically.

This is the thing about painful literature: it hurts. Revelations in print rest uneasily, many of them because they are less revelations and more revolving doors smacking us in the face with more truth than we like. It makes reading Jardim essential, rewardingly thorny: here are vistas framed by separate seas, converging. For those willing to explore, there are reminders of beauty, even levity, in the muck: rambling zoologists; feisty domestic workers resisting kleptomanic labels; bliss, at finding the perfect north coast road to unmoor what remains of a distant, faintly shimmering life.

3 thoughts on “33. Near Open Water by Keith Jardim”