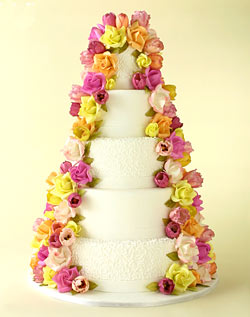 “I was so distracted by the big kitchen that I didn’t even notice the cake on the counter until Kim point at it. It was bout three cakes in one, with pink and yellow icing flowers all over it, and I could understand why people get marry just for this cake. I hold Kim hand, and for a few moments we just stand in the kitchen staring at it.”

Jamar’s parents announce the news of their upcoming nuptials to him one day: happy tidings, under most circumstances, but this re-titling of his Mummy and Daddy’s relationship throws him. If they’re only just getting married, he wonders, then what were they ever since he’s known them? Perhaps even more worryingly, how will life change once they do become wed? Jamar’s neighbour, dear friend and mutually-appointed future bride, Kim, tells him that the pivotal point of getting married has to do with the cake — and what a cake his parents will have! Rumours of its majesty precede it, being crafted as it is by the legendary, but overpriced Miss Clement. If cake is at the heart of marriage, then Jamar and Kim quickly concoct a plan to sample Miss Clement’s cake before his parents, and in so doing beat them to the altar. An undercover trip to Miss Clement’s house (trailing behind Jamar’s daddy when he goes to pay a visit) reveals that the cake is beautiful, and one or two other things besides.

“Getting Marry” is brief: the length of a cup of hastily-slurped coffee, perhaps… or, more aptly, a slice of wedding cake that’s been quickly wolfed down, with gusto. The narrative is seemingly innocuous — the story of a young boy playing at wedding-themed games with his little ‘girlfriend’, but hints, beneath its carefree, giddy surface, at violence, instability and a tenuous domestic balance that barely functions, even with the upcoming peal of nuptial bells.

What I have long admired about Shakirah Bourne’s storytelling is that it takes the best sort of circuitous path. There are a set of guidelines that contemporary fiction writers tend to follow when drafting up their moral treatises on human behaviour — a hopeful New Yorker’s playbook, if you will. Stories like these indicate that it’s alright to break biche (i.e. play hooky) and act contrary to the strictures set out for you in any given MFA class. There is more than one way of investigating interpersonal relationships for the shams and farces they might represent. Writing like this is reliable proof that channeling the voices of the diminutive, letting the youngest person in the room carry the bulk of the dramatic action (or inaction) doesn’t make it juvenile fiction — quite the contrary. “Getting Marry” is not just a humorous story created with fine detailing and attention to economy; it’s a contemplation of everyday life from a shorter height than we’re accustomed. The richness of this technique is reinforced by how we interpret the clues dangled by the writer: expect many a lively debate to ensue over work created in this vein.

It takes no more than a few paragraphs to confirm that Bourne is adept at this fictive sleight of hand.  The very first story to make me question the easy assumptions of my first reading was one I encountered in an undergraduate English Literature classroom. I pored over it several times afterwards, highlighting crucial passages, telling turns of phrase, the use of a single sentence or word to torque meaning around to new, astonishing angles. Bourne’s work in this piece is heavily reminiscent of those talents, a series of eye-openers that assures you, with both humour and pathos leavened into its recipe, to reconsider your initial premises — there are still stories being told daily that will tickle and titillate you.

She has been published in journals such as St. Somewhere, Caribbean Writer,  POUI; Cave Hill Journal of Creative Writing, Arts Etc, and NIFCA Winning Words Anthology, and was a participant of the Cropper Foundation Writers Workshop 2010.

She holds Certificates in Screenwriting from the Barbados Community College and the University of Edinburgh, and a Masters in Art & Cultural Management from Queen Margaret University.

Currently, she is owner of a freelance writing and editing company, getWrite!, and manages an online forum for struggling writers found at www.facebook.com/getwrite. She is also a Part-time Lecturer at the Errol Barrow Centre for Creative Imagination, University of the West Indies, Cave Hill Campus.

Shakirah generously agreed to stop by Novel Niche, and answered a handful of questions I put to her, on her process; her writing plans for the upcoming year, and how she sees herself as an author.

“Shakirah Bourne writes children’s perspectives in a way we’re not accustomed to reading them.” How true would you say this is? How much of your work focuses on stories from the viewpoint of young minds?

Oh, it is very true! Even though the main protagonists are children, my stories are definitely not suited for a family audience 🙂 .
I like to showcase controversial issues through the eyes of innocent and often naïve characters, and a lot of time I find that telling the story through the eyes of a child makes it easier to expose hypocrisy and often gives a new perspective on social issues. “Getting Marry”, for example, tells the tale of a young boy trying to get a piece of wedding cake, but in essence, it is really a story about dysfunctional Caribbean relationships.

If writers have one major theme they try to instil in their reading audience, what’s yours?

I have too many personalities to focus on one major theme *cues laughter*. Often times I write about themes that bring about a strong emotional reaction from inside. This could range from sympathy – two abused women debating who is in the worse relationship, to humour – four men in a rum shop arguing politics. So I don’t have one theme, but I do have one major goal; I want the reader to pause – even for one moment – and think about the story after they’ve finished reading it.

It’s been said that hopeful authors should strive to write the book they want most to read. Has your dream book been written yet, or are you going to write it?

There have been times I’ve read a book and thought “Man, why didn’t I write this?” But when I read The Thing Around Your Neck by Chimamanda Adichie, I knew that it was my calling to write a Caribbean version of that collection of short stories. Olive Senior (I’m one of her biggest fans!) has done it with Summer Lightning so hopefully I will be next 🙂 .

What was the galvanizing moment in your life that made you decide on fiction writing as one of your passions?

I spent a long time thinking about this question, but I still cannot pinpoint that moment when I decided on fiction writing as a passion. I think it is because I didn’t have a choice in the matter. I don’t remember a time when I was not creating stories in my head and writing them down.

Tell us — what current writing projects are you involved in now? Any big plans for 2013?

Well this year I had decided to focus on screenwriting, and getting my scripts from the page to the screen. I just finished writing the scripts for an animated series for the UNDP, and now I’m making the final edits to my first feature film, which should be coming out in 2013. Next year, I’ll be focusing on fiction writing again, and will hopefully finish the final draft of my first novel.

You can read Shakirah Bourne’s “Getting Marry” here. (ArtsEtc Barbados)

One thought on “Story Sundays: “Getting Marry” by Shakirah Bourne”