Shortlisted for the Orange Prize, 2003.

Shortlisted for the Booker Prize, 2002.

Shortlisted for the Giller Prize, 2002.

Shortlisted for the Governor General’s Award for Literary Merit, 2002. 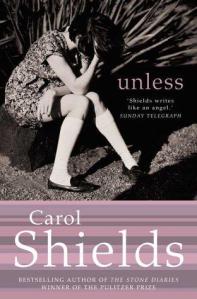 “I’m sorry, but I have no plans to be charming on a regular basis. Anyone can be charming. It’s really a cheap trick, mere charm, so astonishingly easy to perform, screwing up your face into sunbeams, and spewing them forth. … Of all the social virtues, charm is, in the end, the most unrewarding.”

Reta Winters enjoys modest success as a writer of coffee-table fiction, and greater acclaim as the primary translator of the works of literary academic, Dr. Danielle Westerman. Reta is the loving, even-handed matriarch of her nuclear household, comprised of her affable physician husband, Tom, and their three beautiful, talented teenage daughters: Norah, Christine, Natalie. One day, Reta’s eldest daughter, Norah, inexplicably retreats from the world around her to sit, indigent, on a street corner. The only clue behind the reason for Norah’s about-face hangs around her neck, a cardboard sign that says, in black marker, goodness.

If you demand much more in terms of a discernible plot than that, it would be a good time to slip Carol Shields’ Unless back in place on the bookshelf, in lieu of something… structurally meatier? More dense? Don’t be fooled, though—the book itself is no lightweight; neither can it be called the ‘coffee-table fiction’ dished up by Shields’ protagonist. Most of Unless reads like the diary-journal of a woman torn by grief, given over to reflections of her absurd, tragic hand. Reta’s ruminations are by turns funny, bitter and harrowing… and who doesn’t love a satisfying emotional stroll through a diary, especially when it’s someone else’s?

One wonders how Reta’s grief stocks up against notions of universal suffering—can a middle aged, upper middle class woman’s travail of a daughter deciding to play hobo hardcore compare, truly, to tales of the genuinely dispossessed, the structurally, financially bereft? Think of Unless as a semi-conscious case for the very real possibility that it may, it can, and it does.

Readers unaccustomed to a precise confessional narrative may find Shields’ prose tough—specifically, slow-going. Her style seems careful above all else. This is not a novel of many passionate outbursts, and even when passionate utterances are uttered, they seem filtered through the sobering veil of realization of loss, of an acceptance of devastation. It is a novel that does not rely on or require shock value, staggering loopholes, a thrilling dénouement, to make itself acutely felt.

Norah, of whom little is heard directly, save for one manic outburst of aching humanity (one of the novel’s high points, for me) is the perennial good child wounded by the whole wide world, enacting passive vengeance against cruelty through her self-imposed vagrancy. Reta is ‘unwomanned’, ‘unpersonned’ by a grief unsure of what sort of language it can legitimately adopt… much of her malaise is in not knowing, of terrible imaginings, of the futility, after all, of her overwhelming maternal love.

There is more to Reta’s wonderings than her stifling loss. There is the rest of her life, recounted to us, but with the knowledge of Norah’s alienation sounding a persistent background reminder. Reta writes (or, Shields writes as Reta writing) about writing, about finely calibrated, awkward exchanges with the farcical gem of Arthur Springer, her unctuous, self-absorbed editor, who flatters her work near-obscenely in one breath while forcefully proposing massive rewriting overhauls with the other. Secondary characters in Unless are largely drawn with a discerning hand. The little they say, with the exception of Springer, whose chief delight resides in his inability to shut up, is telling.

Reta’s unmailed letters to (mostly) male academics pepper the chapters and are some of the strongest selling points of her articulate rage. She rails against the masculine hegemony of exclusivity that has locked Norah out, or, even more aptly, split Norah from her mother’s arms. The unsent letters are bitter, often brutal, but also incredibly funny, as letters written as an aide to frantic conversations with oneself usually are.

A feminist novel, or a novel that’s ostensibly about gender wars? Sure, if you’re a feminist or gender theorist, then undoubtedly. A novel that will change your life? Um, probably not. This is not, after all, one of the fawning book reviews Reta says she scribbled in her youth—a subtle dig at the earnest undergraduate book reviewer, maybe?

I like this novel. It answers no questions, and makes nothing clearer except the ambiguity driving our personal missions for redemption. Goodness is what you make of it; human goodness seems largely predicated upon the ways we respond to grief—both our own and the sorrows of others.

A wise, fine tale, for a thinker, best suited to rainy Sundays, contemplation or cups of tea (or just as easily not… a packed Priority Bus Route maxi on a sweltering Wednesday afternoon will also do, just less elegantly). Pocket idealists, beware! There’s a touch of intense reality to this one that will sting you sore if you’re easily depressed. Unless is perfect for the reader who knows and appreciates the reminder that, in the face of indiscriminate woe, there is less quick fixing than slow adjustment.