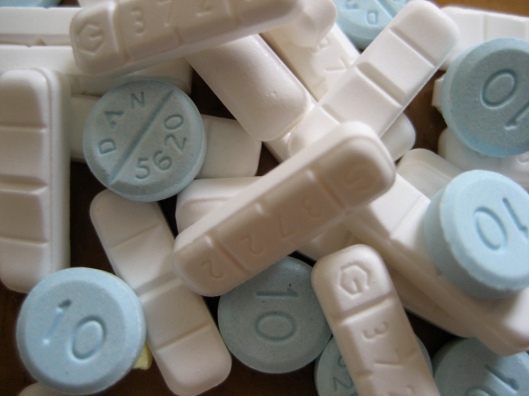 Image: To Sleep Forevermore., posted at Flickr by Dean under a Creative Commons License.

In the end, it’s a combination of everything that puts you to bed.

For the mother, remembered by the unwilling but deep-memoried daughter in Loretta Collins Klobah‘s “Come, Shadow”, it’s the electroconvulsive therapy that surrenders her. To what? She isn’t succumbing to herself, this darkly and intricately scrutinized figure, remembered as both a mother rocking her baby to sleep, and a woman strapped down, juddering and rendered, eventually, inanimate. The poem is an execution of women’s desires, decided for them by medicine and men, then enacted upon them. After eighteen rounds of ECT, the poem warns us, you can expect there will be a nineteenth not recorded here. The poet leaves you to imagine it, in the sanitized hospital hallways of your worst envisioning.

“Come, Shadow” is a marrow-curdling reminder that simply because a past is hygienic doesn’t mean it’s clean. It is the thoughtful, orderly journey to the sanatorium that leaves us shaking, without even a volt rippling through us. I come to find this again, and again, in Klobah’s poems: an internal spillage, the reservoir inside me deftly unbricked with a touch here, a dislocation there, everything deliberate and steady-handed.

The poem begins with a summoning. Come, shadow, it asks. The poem ends by asking the shadow to go. “I’m not your horse”, the speaker declaims. The odyssey that we undertake, between the invocation and the refutation, is a hallway of pain and remembering. It’s a table with straps that dangle like inhuman, uncivil ribbons. It’s a waiting room of the damned, where a woman tells her physician “if she has another / shock treatment, she will die. / It will be months before she is home, though, / and she will be hospitalized uncountable times / after that.” Look around. What shadow taps you on the back?

This is the thirteenth installment of Puncheon and Vetiver, a Caribbean Poetry Codex created to address vacancies of attention, focus and close reading for/of work written by living Caribbean poets, resident in the region and diaspora. During April, which is recognized as ‘National’ Poetry Month, each installment will dialogue with a single Caribbean poem, available to read online. NaPoWriMo encourages the writing of a poem for each day of April. In answering, parallel discourse, Puncheon and Vetiver seeks to honour the verse we Caribbean people make, to herald its visibility, to read our poems, and read them, and say ‘more’. 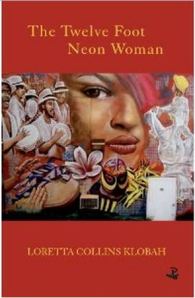 Shortlisted for the overall OCM Bocas Prize for Caribbean Literature 2012.

Shortlisted for the Felix Dennis Prize for Best First Collection, 2012.

We lead complex, beautiful, many-dimensioned relationships with the Caribbean islands we inhabit. They require different masks, evolving responses to unpredictable seasons: whether we luxuriate in the heated thrust of Carnival, or mourn our murderous headlines, we, people of these particular islands, contain multitudes. This is one of the many gracefully-articulated messages woven into the fabric of Loretta Collins Klobah’s poems. At their forefront gleams the titular persona, the twelve foot neon woman, a resistance heroine, a glorious Madonna for the 21st century. She resonates with passion as much as she snarls in discontent, this unabashed Puertorriqueña, and in so doing she provides both anchor and platform for Klobah’s wondrously sung pieces.

Indeed, it is singing that comes first to mind as one allows this collection to simmer in the blood, registering the finely-wrought heat of its movements, the attention paid to dance and the rhythms many claim as indigenous to our shared shorelines. In “The BBC Does Bomba”, barrio children set themselves free to the persistent, encouraging tattoos pounded out on Modesto Cepeda’s barrel-drum, becoming receptacles of kinetic splendour.

Wrapped up in the flowing undulations of dances like these, the poet reminds us, are examinations that pierce, conducted by both foreign and local eyes. The question of perceptions, of how Puerto Rico and the wider Caribbean sees itself, how we are seen by others, runs through several of the poems, keenly felt in pieces such as “Googling the Caribbean Suburbs”. Here, the narrator conducts a search that zooms in on satellite images of her home from space, the rows of houses making up, in impersonal relief, the neighbourhood whose inhabitants she knows intimately, having shared her life in close communion with their own. “Google Earth makes us out as small, blurred spaces,” the penultimate line of the poem reports, closing with, “That’s how we look, from out there.”

Embedded in this discussion of how we see ourselves are uncompromising, angry refrains against the criminal violence exploding through Puerto Rican and all Caribbean streets. Klobah’s voice rings out against the censorship of police brutality, gang warfare, injustices against children. These poems do the opposite of presenting a unified touristic front: they impel in language that abjures the severity of academia for the warmth of the pueblo, for the anxious concerns of living, working, struggling Caribbean people. “We have created a new world where the indiscriminate gun is always at our backs,” laments the narrator, in “El Velorio, The Wake (1893)”, a poem that paints in vivid and excruciating detail the preparations for the funeral of a child killed by a stray bullet.  Unforgettable images of sorrow in the wake of destruction accompany many of these examinings, in the shape of a halo of flies around a child’s head; of corpses that “lie in little beds of straw in the war zones”; of five young bodies tumbling off a fortress wall, “their surprised appendages flailing like starfish legs, turning like pinwheels.”

At the epicentre of all this, the soul’s purely decadent delight with its own rhythms is allowed to unfurl. Poems like “The First Day of Hurricane Season” possess this self-ownership without apology or shame, as its narrator, a woman in the full glow of her maturity, savours the taste of her life as it is now.

“I brew fresh ginger tea with coarse brown cane sugar,
cut a papaya, and watch the sun bead its juices.
No one ever taught me to expect that a phase of life
spent without a lover could be as happy, simple, and rich
as this.”

There is a way, too, that Nature reaches out to graze its fingertips against the wetness of human experience in the poet’s verse. The veil between what we fabricate for convenience, and what the land offers us for survival: this seems thinnest and most porous in pieces such as “Night Wash”, wherein a woman, post-washtub-rinsing, hears night beckoning her. “When one frog sings alone,” she listens, “it sounds like someone weeping, or hiccuping after the kind of hot-eyed, bottomless weeping that I have not had for a very long time.” Even amidst the uncertainty of violence, about which nothing is definite other than its eventuality, these poems are sheathed in sylvan hope. They can show you the way back to your own open heart,  gently, with the grace of forests, bamboo cathedrals, singing frogs.

If we run the risk of becoming inured to daily senselessness, then Klobah’s poems pull us back from the brink of ennui, reminding us what fiery solace can live in raised arms of protest. There is a balance here of old worlds meeting new, of the slavery barracks colliding with street art, of our ancestors melding into the patterns of fierce pop and rap songs.

The twelve-foot woman herself, she who can claim many names in daylight or in darkness, holds this cultural syncretism proudly in the cradle of her belly. In the lushly-titled “The Twelve-Foot Neon Woman on Top of María’s Exotik Pleasure Palace Speaks of Papayas, Hurricanes, and Wakes”, she sways in her hard-won confidence. She has wrestled her autonomy from the clutches of slave owners and abusive lovers, from history’s cruelties and a nation’s difficult congress with itself. She channels “Oya, orisha of whirlwinds and cemeteries”, making no apologies for her pain, no reparations for her sweet, Boricua music, intent on “writing my son and daughter all my love songs,” a woman warrioress we both need and recognize triumphantly.

A marginally shorter version of this review first appeared in the Trinidad Guardian‘s Sunday Arts Section on August 19th, 2012. You can view it here.