Batwings and the Curtain of Night, written by Marguerite W. Davol, illustrated by Mary GrandPré. Published in 1997 by Orchard Books, New York. 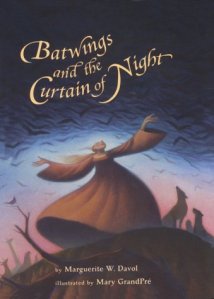 This tale first came to me at the age of 15 or so.

The Mother of All Things shapes the world lovingly, halving its hours into night and day, then bestowing it upon all the creatures of sea, wind, forest and field. Rulers of themselves and their earthly domain, the animals are all drawn to night’s restful canopy, but agree that it is overwhelmingly dark for their navigations. Purposing to alter the face of night itself, they enlist the aid of all the world’s bats in pulling back the vast, inky curtains of nights, to allow more light to peer through. As the Mother of All Things watches on wisely from her vantage point, her animal kingdom valiantly attempts to punctuate the mysterious deep with points of glimmering light, mirroring her own desire to colour the world in radiance, at the first breath of its Creation.

Stories that sing different choruses about the beginnings (and, for that matter, the endings) of All Things have always captured my attention and delight, especially when they are compellingly, sincerely told. Batwings and the Curtain of Night is no exception. The language employed by Davol invites itself satisfyingly to being read aloud, fashioned as it is of simple prose, elaborately arranged, with an overall effect of graceful, easy magic. Mary GrandPré’s art, made famous on the Scholastic-edition covers of the Harry Potter series, is an exquisite complement to the narrative. It is imbued with equal measures of light and darkness, mystery and illumination, depth and phosphorescence; therefore its very style patterns near-perfectly the concerns at the book’s core. I cherish every reread of Batwings and the Curtain of Night as a gently-bestowed reminder of all the beautiful things that are wrought from shells of seeming brokenness. (Read it, and you’ll know just what I mean.)

“Together they climbed the highest mountain. When they reached the peak, they looked up. The sky, almost dark by now, still seemed very far away. Could they reach it?

The owl said, “We must all fly as high as our hearts will allow.”

With a mighty whirl, the bats and the owl soared toward the sky. Struggling upward, they flew and flew until they thought their hearts would burst. But no one gave up.”

This book would be best beloved by:

♣ anyone who believes in, or has built altars of prayer in honour of, a bountiful, benevolent Mother of All Things.

♣ those who appreciate the thriving truth of multiple meanings in the dawning of our world.

♠ one for whom the bat is no less a mythical,  marvellous creature than a roaring lion, or a peacock in his plumage.

Owl Moon, written by Jane Yolen, illustrated by John Schoenherr, published in 1987 by Philomel Books, New York. Winner of the Caldecott Medal in 1988.

I first opened these pages when I was in my early twenties.

In the quiet, deep heartbeat of a winter’s night, with the moon full and expectant against the sky, a girl walks into the woods with her father. The sounds of human and animal life fade away into white-blanketed silence as they walk, exchanging no words. She is going owling for the first time, and in this sacred space of an awestruck initiation, all her senses are livewires that conduct the experience back to her, and through her, though she utters not a syllable. They carry no nets, no bait (save an owl call, offered earnestly), no measures of entrapment whatsoever. Both she and her father know, in varying degrees of detail, but with equal faith, that the only armour needed for a true owling experience is hope.

There are rare reads that encourage you to become a better person, every time you read them, which simultaneously exact no toll on you for being exactly the person you are, in the here and now. Owl Moon is such a book. Yolen paints a cinematographically vivid landscape with a carefully collected assembly of words, poetically rendered, without any ornamentation, it seems, but a devotion to preserving passionate rituals between parents and their children. Schoenherr reminds us of the subtlety that truly majestic art wields. We are there, with the girl and her father, trudging relentlessly through knee-high drifts, shielding our faces against frost’s kiss, hopeful determination beating in our hearts. I love that Owl Moon speaks so unequivocally to being resilient, to embracing fear and walking calmly through it to the other side, where peaceful territory awaits. This book will remind you of the most sweetly sacrosant of peregrinations you paced out in the company of the one you called, or thought of, as Mother or Father , despite blood. If you have none on which to full-heartedly reminisce, this book will make you yearn to create some, for the children you have, or will.

“When you go owling
you don’t need words
or warm
or anything but hope.
That’s what Pa says.
The kind of hope
that flies
on silent wings
under a shining
Owl Moon.”

♣ the children of winter and all her breath-misting revelations, no matter from whence they hail.

♣ believers in silence as a necessary guide on any journey of note.

♣ all parents who wish to share life-affirming magic with their children; all children who wish to learn how to grow up, and stay young, with their parents.