Give Feral Thanks, Mary Oliver, The Fish

I’ve seen fish being caught off the rocky outcropping of the North Coast at night. What transfixed me most was how violently, how viciously they struggled against death: it’s been years, and still, vividly, I can summon the muscular thrash of a fish torso, the rippling menace of tail sluicing seawater through the black sky, the mute outrage at being plucked from the water with a hook in its mouth. It did not go gently. Good, I thought. Good for you.

“The Fish” frames three movements for us: first, a capture; second, a consuming; third, a symbiosis. On this tripartite structure are so many religious doctrines founded — yet see how gently, how sternlovingly, Oliver gives us an entire sacrament, a fully-infused transubstantiation, in a poem that could be scrawled on the back of a napkin. Death is everywhere in this brief ode to the absolute truth that we are who we devour: after all, the poem’s speaker doesn’t tell us this is the first *and last* fish. No, we sense, dabbing scales away from our lips with moist towelettes, this is the original fish, the prime meal.

There is nothing to regret in it, and our speaker leaves no room for remorse on the gutting table. We receive a gift, instead, as the narrator “opened his body and separated / the flesh from the bones / and ate him.” If this fish-killer grapples with internal conflict, she doesn’t share it with us, unlike the speaker in another famous poem entitled “The Fish”, by fellow late American woman poet, Elizabeth Bishop. In that poem, there is a squaring off, a metaphysical showdown between fish and woman, one that ends in release from the angler’s line:

“He didn’t fight.
He hadn’t fought at all.
He hung a grunting weight,
battered and venerable
and homely.”

Bishop’s fish is a grizzled veteran of the tides, wearing old hooks from former tangles with death, like survivor’s jewellery. Bishop’s narrator doesn’t have the heart – or has too much heart – to put him down after a hard-won life. By contrast, who can say how old Oliver’s fish is? We know it fights, we know that it “flailed and sucked / at the burning / amazement of the air” before it perishes at the bottom of the pail. Its gradual death, in one of the poem’s most seemingly effortless lines of beauty, is “the slow pouring off / of rainbows.” All of this grappling endeavour, all of this ungently going into the good night: she who kills the fish eats every morsel, every scale and eye of experience.

This, we sense, is part of the alchemy of Oliver’s “family of things”. Specifically, it is a poem of place in the strata of that great world tree. “The Fish” is a ritual map: a promise, if you like, of what will happen when you kill, when you feed. The third movement of the poem opens the speaker, mirroring the speaker’s opening of the fish:

“Now the sea
is in me: I am the fish, the fish
glitters in me; we are
risen, tangled together, certain to fall
back to the sea.”

We will never travel alone. That is the assurance of this poem, which it makes without sentimental overture, without any truths but the truth of a fish’s carcass, each flesh-picked bone a skeleton key of certainty. It is an examination of the sometimes-grim, sometimes-gay covenant we make with the subjects of our pain. What we kill and eat becomes part of the ledger of our living: we eat its pain, its life, its every silvery thrash in the sea. Everything we murder for our survival, we give permission to one day, cosmically, ache us right back. 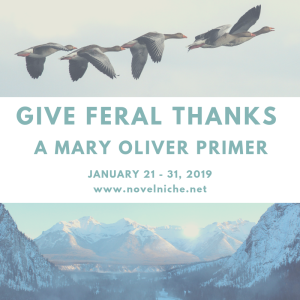 Give Feral Thanks: A Mary Oliver Primer runs from January 21st – 31st.