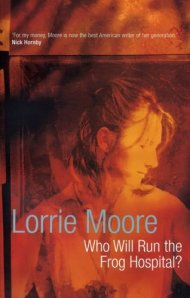 Published in 1994 by Vintage/Anchor Books.

Admit it—you know you’ve got one.

Along with a paraphernalia-packed drawer of your idealistic, angry years betwixt eleven and nineteen, and every holdover memento that’s defied the lure of the garbage or local Goodwill/Salvation Army, (you feign laziness, unwillingness to ‘spring clean’, but you damned well know it’s nostalgia)—along with these, you keep the memory of a best friend. You braided her hair in thousands (you know, like, thirty?) of plastic-clipped plaits. You both got high off of office-supply glue, stolen cigarettes, illicit pay-per-view softcore pornography. You kissed him once, hard, in your father’s garage, and neither of you spoke of it, not ever. You thought of her on the day you got married, and for a guilty second, your maid of honour didn’t seem like such a perfect choice. Together, you played with fire. Together, you were sure you could both change or rule the world.

The enchantingly titled Who Will Run the Frog Hospital? was, for me, worth fishing out of a bargain bin at a charity sale, based on the quirky promise of its name alone. If I could compare the experience of reading it to consuming fruit, it would be like nothing so much as a crisp, tart apple—something in the vein of a not so wicked stepmother’s gift, bearing far less malice than the origin tale, with more wise humour that’s never too far from a sigh.

The novel’s progression seems bivalent at first. Protagonist Berie Carr remembers her adolescent ramblings and misadventures with her best friend, Silsby Chaussée, while the former navigates the murky waters of adulthood and a marriage that is failing in tragically slow increments—this, while she sojourns in a city famed for its passionate interludes. Approaching the story’s end, however, the narrative appears seamless. Whether Berie was assiduously pilfering money as an amusement park cashier in her childhood town of Horsehearts, evading drunken rape and other life threatening risks with Silsby at her side, or wandering alone in the present day through narrow Parisian streets, her hip aching for a secret reason, (one that, when revealed, smarts at the side of the reader herself, for all its quiet cruelty) the story feels linear. It follows the line of the life of Berie, with and without the person who has known her best. What could be simpler, or more haunting?

If it is difficult to quote Lorrie Moore’s prose, it is not because it is unlovely, quite the opposite. It presents a challenge because so much of it is lovely, and not with the hollow lustre of pretty words fashioning no purpose, either. There is a lilting cadence of sadness to Moore’s description that will catch your breath when you least expect to be swayed.

You might say that the novel goes nowhere, in terms of discernible plot progression, and you might not be entirely wrong. Life’s like that, though, isn’t it? We wander countless times over into the murky mire of our favourite mistakes, swearing anew each time, wondering why we are here again, with all the televised and replicated rebellion of teenagedom, all the mortifying ostentation that paves our tumble into adulthood.

When Berie visits with Sils again, on the occasion of their ten-year high school reunion, she knows that Silsby is simultaneously just as she ever was, and lost to her, always. She takes a long, languorous shower in Sils’ bathroom, thinking, wanting.

“I felt close to her, in a larcenous way, as if here in the shower, using her things, all the new toiletries she now owned, I could know better the person she’d become. All evening, I’d been full of reminiscences, but she had seldom joined in. Instead she was full of kindnesses — draping her own sweater around my shoulders; bringing me tea. How could I know or hope that she contained within her all our shared life, that she had not set it aside to make room for other days and affections and things that now had all made their residence and marks within her?”

This illuminating, thorny offering from a severely underrated writer is even more captivating than its title. Perhaps, when you have turned its last page, as I did, you will think of someone with whom you once made a blood oath, with whom you shared scabbed knees and shy showers. Perhaps you will pick up the phone to call them, and feel what I felt, to learn that the number had long been discontinued.

Perhaps you will be luckier (or infinitely less lucky?) and they will answer.

3 thoughts on “8. Who Will Run the Frog Hospital? by Lorrie Moore”