This tale first came to me in my early twenties. 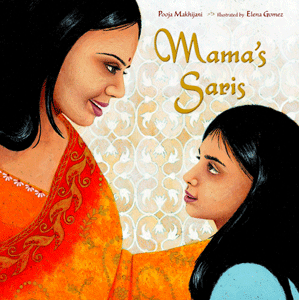 A young girl wants to celebrate her seventh birthday party in the finest style possible, and for her, this means the right to wear one of her mother’s intricate saris. As her mother produces the infrequently worn, much-treasured collection from its storage space beneath the bed, her daughter pleads, cajoles and sulks, seemingly to no avail. Each sari the mother holds up from the leather suitcase has its own story. The one she selects for herself to wear at her child’s birthday celebration is brilliantly orange, trimmed with a carmine hem, and it was also donned on the day she brought her infant daughter home for the first time. Others, in colours of ripe fruit; the ink-dark midnight sky; the wide, blue ocean, are paraded before the daughter, and finally, sensing the young girl’s urgency, the mother comes to a momentous decision that will frame the day in heightened significance for them both.

Which girl hasn’t wanted, in one way or another, to walk in her mother’s heeled, perfumed, glittering footsteps? Mama’s Saris strikes keen chords of remembrance and nostalgia for me, as I have been that giddy, optimistic protagonist, perched on my mother’s bed, my arms arrayed in purloined bangles every colour of the rainbow, yearning for an induction into the mysterious magic of my first sari. Author Makhijani expresses it well in the note that introduces us to the story:

“I wrote Mama’s Saris after realizing that my own fascination with my mother’s fancy clothes was not unique. It seemed as if each of my female friends, regardless of ethnicity or age, remembers being captivated by her mother’s grown-up clothes. By dressing up like their mothers (and emulating everything else that they did), they would be just as beautiful, too.”

Gomez’s art partners itself with Makhijani’s prose in an exquisite, sensorially aware marriage that is, simultaneously, rapturous to behold and arresting to read. Each page unfurls before us like a yard of ornately bedezined sari cloth, stitched with remarkable love, attention to detail, and master (mistress!) craftswomanship.

” ‘What about this one?’ I point to a sari that I don’t think I’ve seen before. It is orange like fire with edges that look like they have been dipped in red paint.

‘I wore that sari the day we brought you home from the hospital.’ Mama smiles. ‘All your aunties and uncles came to greet you.’

Mama unfurls it. It shines like the afternoon sun.”

♣ anyone for whom the sari is a sublime expression of beauty and artistry.

♣ mother and daughter duos eager to infuse their lives—and dress up dates—with even more revelry!

♣ those who skip and lilt, exultantly, at the place where traditions are delicately and deliberately passed on, those torches that bloom through the years.

Owl At Home, written and illustrated by Arnold Lobel. Published in 1975 by Scholastic Books, New York.

I first opened these pages when I was less than five. 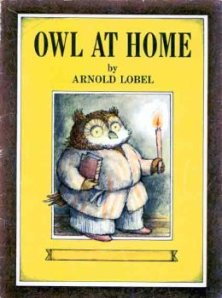 Owl At Home is an offering of five short tales in the life of Owl, an affable, thoughtful gentle-bird who seems to delight in his own company, as well as in exploring the world around him. In “The Guest”, Owl learns that some visitors simply won’t adhere to expected protocol, when he invites Winter past his threshold on a particularly chilly night. “Strange Bumps” tells the story of Owl’s fear of two mysterious lumps that appear near the foot of his bed when he lies down, and how he deals with their persistent recurrence. A kettle full of weeping, prompted by ruminations on the saddest things, such as forgotten pencil stubs and never-seen sunrises, fills the kettle for Owl’s delicious, albeit slightly salty, “Tear-Water Tea”. “Upstairs and Downstairs” reveals Owl’s frustration over his inability to exist both on the landing as well as at the foot of his twenty-stepped staircase. Finally, in “Owl and the Moon”, our avian friend finds that a contemplation of the moon near the seaside doesn’t necessarily end when he folds his wings and prepares to head home.

I’m tempted to say, “Everything!”, and conclude this section thusly.

It’s important to know that this was one of the first books I learned to read. Owl At Home didn’t just teach me about proper pronunciation, basic grammar and syntax governance, though. It schooled me in self-sufficiency, creative zeal, an Owlian zest for life, of the wonder of imagination and the power of suggestion. Owl didn’t *need* a Mrs. Owl, or a flock of owl-lets. He wouldn’t have been diminished by their presence, sure, but more importantly, the absence of their presence didn’t diminish *him*. I don’t think I mused on it so lucidly at four, but I loved his aloneness, even then, and the way in which his solitude didn’t make him lonely, or morose. We could all stand to borrow a page or three from Owl’s book… a book which I can still read today, and delight in, and laugh with, and smile til my face aches, just as much as I did when I was unfamiliar with the intricacies of the shoelace. You won’t be able to read this book (to yourself, or to your children) and tell me you’re not at least tempted to try out that Tear-Water Tea recipe. Come on… you’re thinking up at least five sad things right now. Go fetch a kettle, mate.

“Owl watched the moon.
It climbed higher and higher
into the sky.
Soon the whole, round moon
was shining.
Owl sat on the rock
and looked up at the moon
for a long time.
“If I am looking
at you, moon
then you must be
looking back at me.
We must be
very good friends.” ”

♣ ramblers, ponderers, pocket sages, anti-politicos, and all people who’ve wanted to be both upstairs and downstairs at least once in all their lives.

♣ everyone. Everyone. This book is for everyone. It’s for you. It’s still, and always will be, for me.