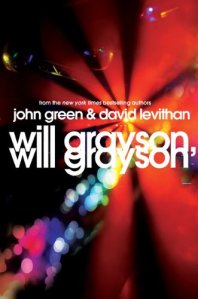 Published in 2010 by Dutton Books.

When I first saw Will Grayson, Will Grayson, winking at me from the hardcover bookshelves, I don’t know why I thought it would be science fiction. Perhaps it was the prismatic, kaleidoscopic-reminiscent imagery on the front cover that made me imagine interstellar journeys. Even when I read the front jacket cover’s blurb, the description of fate, delivering both Will Graysons to the same surprising crossroads, led me to conjure up non-terrestrial possibilities. As I read on, I realized that the novel was decidedly non-speculative… but not an iota less fantastic.

Will Grayson, probably best known to his fellow high schoolers as loyal friend to the irrepressible, unabashedly gay Tiny Cooper, has curated a couple simple rules for getting through life relatively unscathed. They are: “1. Don’t care too much. 2. Shut up.” Both devoted to his friend and increasingly bemused by him, Will finds himself struggling to make sense of his role in the shadows that Tiny’s larger than life influence casts. His uncertainty only seems to mount as he wrestles with inconvenient feelings for a girl he maybe likes, maybe doesn’t: she of the quiet cleverness, the parallel music-crush on Neutral Milk Hotel, and the ultra-awesome smile, Jane. In another school, another Chicago town, will grayson, anti-capital letter user, anti-everything-ist, makes it through the tedium of his days by way of furtive online conversations with isaac, a guy he’s never met in person, a guy who gets will on every seeming level of importance. will keeps isaac a solemn secret, even from his more-or-less best friend, maura, a goth girl whose dependence on will runs deeper than he can initially suspect. Will Grayson and will grayson are seeking out entirely different things when their paths converge in the unlikeliest, potentially most scandalous of places, and their lives take on unimagined dimensions, expanding to include new allegiances, bewildering affections, heart-singing revelations… and the most bejewelled, glitteringly decked out high school musical of All Time.

This is a laudable book for many reasons, principal among them the ways in which it de-exoticizes the story of the gay high school student. I expect that there’ll be some opposition to this notion. “Who could be a more outlandish character than Tiny Cooper?” one might ask. It’s true; they don’t get much more delightfully camp, more technicoloured-in with non-heteronormative pride than Tiny does. He revels in his romantic and lifestyle choices, and makes no apologies for them… but this, the authors seem to be saying, isn’t even strictly the point. The point resides in the suggestion that Tiny needn’t be an anomaly, that writing about the lives and loves of any number of Tinys should really be par for the course in capturing the richness and diversity of the young adult’s life, gay, straight, bisexual or otherwise inclined. Tiny himself, in a candid conversation with will grayson, puts it best:

“tiny: you know what? i’m totally at peace with being big-boned. and i was gay before i knew what sex was. it’s just who i am, and that’s great. i don’t want to be thin or conventionally beautiful or straight or brilliant. no, what i really want – is to be appreciated.”

It isn’t just Tiny who struggles with the desire to be embraced for who he is, for what he brings to the table – every character of note, including but not limited to the Wills – feels this instinct deeply. In fact, they feel all their feelings deeply, and the authors never shy away from documenting those feelings with grace, humour and irrepressible honesty. Here’s an example of that unflinching candour from will grayson, as he contemplates Tiny’s declaration of a necessary “mental health day”.

“i think the idea of a ‘mental health day is something completely invented by people who have no clue what it’s like to have bad mental health. the idea that your mind can be aired out in twenty-four hours is kind of like saying heart disease can be cured if you eat the right breakfast cereal. mental health days only exist for people who have the luxury of saying ‘i don’t want to deal with things today’ and then can take the whole day off, while the rest of us are stuck fighting the fights we always fight, with no one really caring one way or another, unless we choose to bring a gun to school or ruin the morning announcements with a suicide.”

The truly beautiful thing? So much of the book is this refreshingly forthright, no matter which Will is narrating. I read Will Grayson, Will Grayson like a nostalgic primer on what it felt like to be marginalized, misunderstood, poorly-quoted, confused, sexually uncertain and bursting with a thousand intense ideas, in my teenage years. Green and Levithan don’t, to their credit, ever explicitly state that your life becomes better when you become an adult. They don’t even pretend that the things you cared about when you’re a teenager will evanesce in importance when you’re saddled with a full-time job and greying hairs. They concentrate on the absolute, inviolable sanctity of your God/dess and the Universe-given right to feel the feelings you’re feeling, no excuses, no regrets. There’s no need to sweep those passionate outbursts beneath the rug, no need to objectify your silences, be they awkward or serene: every bit of you, young person, is valid, has meaning, is worth something on this planet.

In a genre of literature stifled with romantic considerations, (many of them poorly worked out and dubiously contextualized) a book like this is a saving grace. There are concerns of the heart in these pages, to be sure – how the heart breaks, how the heart resists love while plummeting towards it, how the heart seeks like-beating hearts out… but the novel’s epicentre isn’t carnally-propelled, and this is a relief. It would be more accurate to say that the writers throw themselves into tides and currents of the whole heart, not just the chamber that pines for a boyfriend or girlfriend. These are affairs of the heart in their baffling, million moods per minute-ness, making this book required reading for young adults, and those who know that being boldly and beautifully sixteen is just a state of mind away.