I am far too impersonal on Novel Niche, I’ve been told. Where are my blog posts in dedication of family events, the births of small creatures, the beginnings and endings of milestones? I will never overtly document those things in this space, dear readers. What I say about myself, is, I think, glaringly evident in the way I talk about books, or hope to talk about them. If you read my reviews, all the way back from Carol Shields’ Unless ‘til now, you will find a weird sketch of the person who is weird Shivanee. You might learn more about me than you ever wanted.

I intended, tonight, to take part in the 30 Day Book and Literature Challenge that’s popular among the Internet’s bookworms. However, after wrinkling my brow and bitching, “What does that even mean?” to several of the questions, I realized that this challenge, while admirable and far-ranging, simply wasn’t the right literary brew from which I wished to drink, not this time around. Startlingly, I discovered that I wanted to answer questions that were more — bare.

That’s the way I write fiction and poetry. I pare things down to bone and marrow; I investigate what’s uncomfortable, feral and queer: not because it’s especially delightful to do so (though it sometimes is), but because that’s what writing signifies to me, at 26. I write to fill people, including myself, with terror and arousal and giddy, aching awareness. It becomes less and less possible to apologize for that as time goes on.

So I’m going to ask myself questions about books for thirty, non-consecutive days. Probing, unflinching questions. Questions that might make Christiane Amanpour proud, were she a steely librarian. If you’d like to answer my questions, too, please do so in the comments, or wherever takes your fancy. I would be honoured to have your company during the length and breadth of this experiment. This project will tell you more about me than any Christmas family portrait ever could. Perhaps we will learn more than we bargained for about each other, and about the books that have stood by our sides, on our dressing tables and in our satchels for all our lives so far.

Day One: Which fiction to film adaptation broke your heart into several messy, inconsolable pieces? 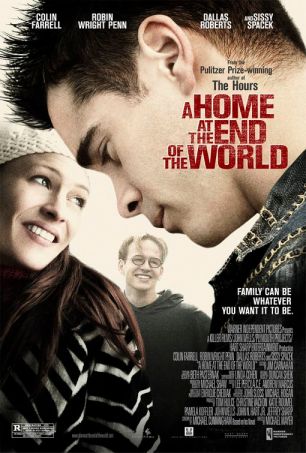 When I read A Home at the End of the World by Michael Cunningham, a few years ago, I remember being stunned, and discomfited, by his chronicle of the curious, unsanitary ways in which people come together, and then cast themselves asunder. Cunningham seemed to be holding up not just the relationship triangle in the novel, but every unconventional friend-and-romanceship algorithm, asking us to question the meaning we put into structures of marriage and long-term commitment. I just tugged my paperback copy from the bookshelf at my side, brushed off the thin grey film of dust on its spine, and cracked open the book to a familiar page, to the opening paragraph of a chapter that describes the way a mother loves her infant.

“I never expected this, a love so ravenous it’s barely personal. A love that displaces you, pushes you out of shape. I knew that if I was crossing the street with the baby and a car screamed around the corner, horn blaring, I’d shield her with my body. I’d do it automatically, the way you protect your head or heart by holding up your arms. You defend your vital parts with your tougher, more expendable ones. In that way, motherhood worked as promised. But I found that I loved her without a true sense of charity or goodwill. It was a howling, floodlit love; a frightening thing. I would shield her from a speeding car but I’d curse her as I did it, like a prisoner cursing the executioner.”

Love like that is what makes life worth living, all the great poets would have you believe. It isn’t exclusive to a lover, either — indeed, sometimes it seems like the particular province of how your heart works, or doesn’t, once you’ve given birth.

The book on its own broke my heart, but it took a late, late night viewing of the film to drive the chisel in properly. I was suffering through the post-salad days of a dying relationship, then. I remember, during the closing credits, dialling a phone number, my face wet and my speech incomprehensible. I wanted some sort of assurance — a manifesto of good faith that we wouldn’t fall off the edges of each others’ lists of favourite people. It was a request made from so much intense gibberish, and it was met with irritation and bemusement by the person on the other end of the line, torn from their sleep by my Michael Cunningham-fuelled ramblings.

I don’t remember now whether the movie was spectacular or not. I thought of it as its own territory, divorced from the book but sharing living space non-rancorously. What galvanized me into that phone call, I think, was the sensation of the shortness of time. We spend so little of our wakeful hours treating the people we love with unabashed adoration. Our mothers aren’t always goddesses; sometimes they’re the shrews berating you for a laundry list of disappointments. Sometimes your glowing girlfriend isn’t just the love of your life and all the lives to come; she’s also the evil bitchface casting longing looks at your cousin in the parking lot after a drunken New Year’s Eve party. We love and bicker with so much complication.

I think my phone call was motivated by the desire to be good. I wanted to remind the other of my unfailing love (which, of course, had failed us both on more than a few occasions). As I was reminded then, and as I reflect now, wanting desperately to make those phone calls is almost always a sign that they will be too late. Even though the recipient of the 2:45 am post-film-viewing call is someone who no longer occupies space on my list of favourite people (or, really, a list of people I contact via phone or smoke-signal), A Home at the End of the World will always make me think of early morning sobfests and crumpled tissue, good intentions wasting themselves away in the hard, undeniable light of a new day.

3 thoughts on “Yourself in Books, Day One.”