Goodness, it’s been a while, Novel Niche.

I’ve been getting ready for the third annual NGC Bocas Lit Fest, a celebration of books, writers, publishers and literary folk of every description, that takes place in Port of Spain, Trinidad, in the last few days of each April since 2011. Working for the Bocas Lit Fest is both a pleasure and a gauntlet: it reinforces the best reasons (and perhaps even some of the inconvenient truths!) revolving around why I love this reading and writing life. It also packs a wallop: this year’s festival features over sixty events within a four day period (official festival programme here) — and this year, I’ve the terrifying distinction of being on the actual programme as a member of the New Talent Showcase: i.e. a spotlight on an up an coming writer of promise. Yes. Appropriately thrilled and terrified.

Recentlyish, I went book-hunting for a collector’s edition of To Kill a Mockingbird as a birthday present for my best friend. Her boyfriend and I ventured to The Reader’s Bookshop in St. James, a money-sucking, brilliant indie shop consecrated to otherwise elusive fictive finds. We scored Harper Lee in glorious deckle-edgedness, to be sure, and for the first time in what seems like a long time, I bought books for myself, too. My reading life has been guided greatly by work purpose; I’ve been reading the fiction, poetry and non-fiction submissions that have been sent into my review piles. I’ve not had to reach for my wallet for the sake of good literature for quite some time, and this makes me lucky, I know.

Reading voraciously becomes an expensive habit, and I’ve had conversations with myself that meandered along an interior dialogue of “Do I really want this new A. S. Byatt? Oh, yes. Will I be content to borrow it from the library? Oh, no. Am I really attached to the idea of buying that brand-name bread? Nope. Byatt wins.” I cannot fathom that I’ll always have a steady stream of review books in my future, either — is it quite mad to think that I look forward to more “bread or literature” talks with myself? Because I do. It’s a good reminder of being grateful for what matters within the weird realm of my own personal hierarchy of needs. Sometimes scripture is more essential than pumpernickel.

Here’s what I bought.

Antes Que Anochezca, the Spanish language Before Night Falls by Reinaldo Arenas (incidentally, I bought my best friend the English translation last Christmas, and wrote about it briefly in my last Yuletide & Resolution blog post). Arenas was both prolific and persecuted, a Cuban writer of plays, poems and novels. Antes Que Anochezca is his 1992 autobiography, and it marks the first Spanish work I’ll read, in full, after a long hiatus from this, my second tongue. Spanish often makes crisp, instant sense to me in ways that English doesn’t always — which may seem addled, but possibly resonates with other bilingual folk. My reading will be rusty; I’ll probably borrow Best Friend’s copy of the English version and read the pair in tandem, chapter by chapter. The revelations are sure to be immense, intense, and catalytic in terms of fleshing out my Spanish reading to the places I would like it to journey.

Any novel titled And Let the Earth Tremble at Its Centers  becomes an “I must have you in lieu of bread” acquisition. This is the first novel of Gonzalo Celorio’s to have been translated into English, an undertaking of the Texas Pan American Literature in Translation series. (Marginalia: in its original 1999 Spanish publication, it was released by the same Tusquets Editores who released Antes Que Anochezca on their Fábula line.) It’s translated by Dick Gerdes, and foreworded by Ruben Gallo, author of Freud’s Mexico: Into the Wilds of Psychoanalysis, who says in his opening comments that Celorio’s novel “belongs to a genre with a long history in Mexican letters: the literary portrait of Mexico City.” And Let the Earth Tremble at Its Centers hailed me out on the strength of its seeming wondrous weirdness: a tenet that goes far with me in writing, if the weird is shored up by skill and storyline. 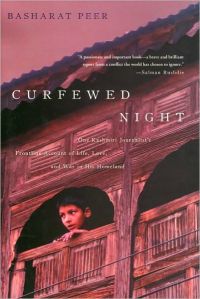 Since it was published in 2010, I’ve thought about Basharat Peer’s Curfewed Night more than occasionally. Peer, a Kashmiri journalist and political commentator, writes about the “culture of intimidation” in his homeland: of censorship, violence and the horrific relationship between the two. The first memoir on Kashmir by a Kashmiri on growing up in that valley, the book is described by reviewer Shelly Walia (full review in The Hindu here) as “a heart-rending account of a placid valley where life has been made sour by the ignominy of politics, where the language of politics has excluded the voices of the people.” Walia concludes that Curfewed Night’s laurelling achievement is that the work is neither parochial nor ethnocentric, but human. Seeing it on the non-fiction shelves was a jolt to the heart: a reminder of what I owe it to myself to read. A beautiful hardcover, it was too expensive and worth the price of many loaves of bread. No way I would have been happy leaving the shop without it.

I also ordered a book from the shop. I went back to collect it yesterday.

A literary treatment I’ve admired on my colleague’s blogs for some time is a multi-tiered reading project: handling an impressive beast of a tome in segments, and offering a reader’s diary alongside the gradual covering of sections. Currently, Iris on Books is doing it with the daunting War and Peace (here’s her most recent check-in) and I’m fairly certain that on the heels of the successful musical film adaptation, Victor Hugo’s Les Misérables is enjoying similar, concerted analysis on book sites. While not as long as either Les Mis or War and Peace, the tetralogy of Parade’s End by Ford Madox Ford is a formidable slog, standing at 836 pages in that dense, vaguely offputting-but-not-really-once-you-get-into-it 10.5 Dante MT typeface. It is, if the rumours are true, the quintessential novel about war, and has been heralded as “possibly the greatest 20th-century novel in English” by John Gray, the New Statesman‘s principal book reviewer (snippet quote here). I’ve seen the BBC Two miniseries, gorgeously written for the screen by Tom Stoppard, and can attest to it being a stunning, trenchant production. I’m really looking forward to reading Parade’s End meticulously and thoroughly, and to sharing my annotations, essays and musings on the blog as I go (I already predict character sketches; reviews of each tetralogy; themed postings on WWI, desire and gender!) — it will, I think, be a consummately nerdy, cerebral experience.

I have become less and less interested in the long-term acquisition of Things, in almost every area save books. If it’s true that every time we spend money, we cast a vote for the kind of world we’d like to create, then I suppose based on my wallet habits, my ideal world would resemble a cavernous library, with nominal shelf space for my odd earrings; sheaves of handmade paper; sensible shoes, and bread.

3 thoughts on “On [actually] buying books again: of Bread and Literature.”