How do we word grief, in the house belonging to mothers?

Cheryl Boyce-Taylor’s “He Stood Near My Bed” is an elegy. It gives a date: March 22nd, 2016. It surrounds that date with lamentations and wailing. Listen to the poem, to what it implies by its use of white space, the vacancy around that date. The brief column of whys that precedes March 22nd, 2016 deftly vaccuums the sorrow. It’s starkly omnipresent, both fecund and ungovernable.

The poem takes us through the halls of the beloved child, “boy who smelled like popcorn and freshly picked tangerines”, a boy who is the “red Arima dirt road”. When the poem opens, this boy asks his mother about the origin and function of prayer, of the recipients of that divine asking. “He Stood Near My Bed”, through stations of loss, moves itself into a prayer, so that by poem’s end, the bereft speaker, wounded and brittle in her grief, says, “dear glorious morning   hold him dear raven / dear wings that carry us   hold me.”

This entire poem is an ache, a witnessing of death that is both heartrending on a factual level, and radiantly alert in its use of language to convey that spirit-rupture. When the poem carries me to the House of Slaves on Gorée Island, I feel my throat constrict with an airless tension. It is a place, the poem’s speaker tells us, where “our spine fades  into the walls”. These sites of historic pain reverberate with the weight of the dead. The mother’s body, as a site of mourning, can do no less.

An activation of “how sharply loss wounds the body”, this poem is its own pallbearer, its own brigade of tears: and of a remembrance, too, when all was joy in the smile of a young boy, questioning our prayers.

Read “He Stood Near My Bed” here.
Cheryl Boyce-Taylor’s fourth collection of poems, Arrival, was published in 2017 by Northwestern University Press. 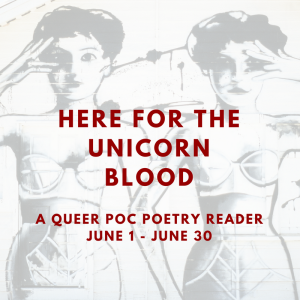 This is the eighth installment of Here for the Unicorn Blood, a Queer POC Poetry Reader which runs from June 1 – June 30. Historically, June commemorates the 1969 Stonewall Riots, heralded as the birth of the modern LGBTQ+ rights movement in the United States. #PrideMonth’s global significance, its unabashed celebration of queerness, its marshalling of non-heteronormative joy, resistance and tenacity, motivates this close reading series, which specifically engages the work of POC Queer Poets, in international space. People of colour have been vital to queerness before queerness had a name: this is one way to witness that, to embed my reading practice in it, and to raise my brown, queer fist in yes.

One thought on ““He Stood Near My Bed” – Cheryl Boyce-Taylor”