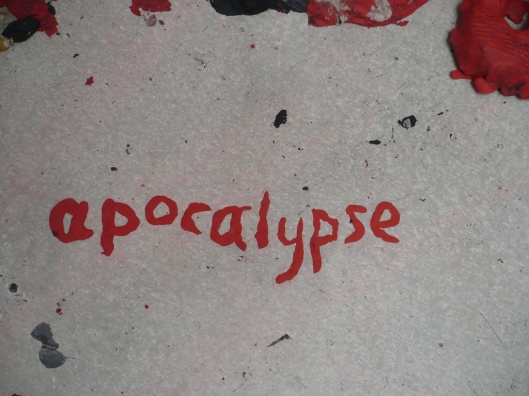 Image: Apocalypse, posted at Flickr by Charles Hutchins under a Creative Commons License.

What form do you take in the future? In Joshua Whitehead’s “Full Metal Oji-Cree”, the revolution is upon us, and it’s hybridized, mechanized and fuelled by this truth: “us indians sure are some bad ass biopunks”. Think less steampunk-as-aesthetic, more your grandmother’s arm, robotic, wielding a machete beaded with oppressor-blood. The blood of ‘the native’ isn’t here for white consumption in this future. There are no ‘noble savages’. That racist language has been expelled, and in this future — which feels very much like the now — “the prehuman becomes the precursor to (rez)urrect / the posthuman in the transhuman / so fuck you / well survive this too”.

What I love about this poem is its gleaming, weaponized indifference to convention, on both thematic and stylistic levels. “Full Metal Oji-Cree” feeds itself on the nullification of “terra myths”, the bombardment of settler claims, the razing of the current world order. No more righteous cowboys, Clint Eastwooding all over your tv screens. No more Abraham Lincolns, no more olive branches. If you want reconciliation from this poem, you’ve come to the wrong place. Fuck reconciliation, says this poem’s speaker, who can call for backup from his bloodline and receive it in the tens. We’re past that. We’ve alchemized-weaponized that futility, that abuse-masquerading-as-alms, into something brighter, better, well-oiled and unmissable, even if the world should burn down. We, the poem’s speaker tells us, will survive it. Hell, haven’t we been surviving it all this time?

My favourite lines of the poem, the ones I’ve stuck up in rainbow coloured bone-pins to the astral ceiling of my survivor’s tent, are “there are indo-robo-women fighting cowboys on the frontier / & winning finally”. Because yes, please. Let the future be now, and let it be full of transhuman woman warriors, staking old white men with bloodsplatter on their technobeads, glowing.

This is the twenty-ninth installment of Here for the Unicorn Blood, a Queer POC Poetry Reader which runs from June 1 – June 30. Historically, June commemorates the 1969 Stonewall Riots, heralded as the birth of the modern LGBTQ+ rights movement in the United States. #PrideMonth’s global significance, its unabashed celebration of queerness, its marshalling of non-heteronormative joy, resistance and tenacity, motivates this close reading series, which specifically engages the work of POC Queer Poets, in international space. People of colour have been vital to queerness before queerness had a name: this is one way to witness that, to embed my reading practice in it, and to raise my brown, queer fist in yes.