What does this one, blue earth of ours look like, from space? You could ask Major Tom. If you can find him.

David Bowie’s “Space Oddity” hones in on Major Tom, who’s lost communication with Ground Control. Tom’s already a tradeable commodity, back home – the newspapers want to know whose shirts he wears, and tell me you can’t picture his professional astronaut photoshoot before leaving for space: square jaw, big white teeth, patrician nose. Blonde, like as not. The poster child of the sort that human international superpowers saw it fit to send out there, first. Tom’s probably the kind of intergalactic emissary you’d still see being sent to represent us all, at the next roundtable meeting.

Why do we put the record on to play “Space Oddity”, time and time again? It’s not because we know a hell of a lot about Tom, that’s for sure, or where he’s gone since his feed went blurry and staticky. Bowie’s lyrics are at once spare and haunting. They flood you with space: you can float in them, imagining Tom’s motivations; the way his wife looks as she sits in front the TV, watching his space rocket launch; his bottle of protein pills hovering in antigravity, within his tin can. Tom doesn’t do much of the song’s speaking, but what he says is enough to fill scholarly essays and stoners’ notebooks with vast reams of speculation:

There is so much that is bleakly, absurdly beautiful about Bowie’s lyrics, like the way the countdown to liftoff is interspersed between systems checks and platitudes. Wherever Major Tom is tonight, I hope the stars shine on him sweet.

Read the lyrics to “Space Oddity” here. Listen to the song here.
David Bowie released “Space Oddity” as a single in July 1969. He died two days after the release of his final album, Blackstar. 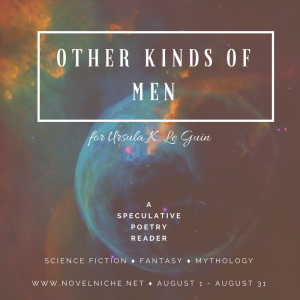 This is the eighth installment of Other Kinds of Men, a speculative poetry reader in honour of Ursula K. Le Guin. Speculative writing, which encompasses the major genres of mythology, fantasy and science fiction, has often given voice to the most relentless and ungovernable urgencies of this age, and any other. Le Guin understood this: that to write about dragons, ice worlds and other seeming oddities was, in fact, to write into the messy, riotous complexity of ourselves. Here’s to dragons, and here’s to Ursula.