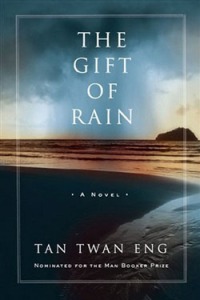 Published in 2008 by Weinstein Books.

Longlisted for the Man Booker Prize, 2007.

“You were born with the gift of rain. Your life will be abundant with wealth and success, but life will test you greatly. Remember—the rain also brings the flood.”

I’ll open this review with a tiny confession of sorts; I’m a bit of a sucker for quirky titles and quotations featured at the beginning of any literary work. The effect it has on me is akin to what the average man may experience while driving, and suddenly spotting a pretty woman jogging in the opposite direction. We’re both likely to get whiplash; me, from craning my neck to try and read what’s written on the spine of the shelved book and him from the fender-bender he will inevitably cause.

Now that I’ve gotten that off my chest, Tan Twan Eng’s debut novel The Gift of Rain, is the kind of work which could have piqued my interest from the title alone, but the aptly selected quotation from Jean-Dominique Bauby’s The Diving Bell and the Butterfly pretty much ensured that I would read on. Partly because I was intrigued, but primarily because those two aspects are merely decorative icing; to be certain about how the creation tastes, I have to consume the sample.

The story told is as common and familiar as rainfall is to the island of Penang in Eng’s novel; that of an autobiographical tale recounted by an individual who is in his twilight years. The character in question is Phillip Hutton, a half Chinese, half British native of Penang who, in his early seventies, is the lone resident of the mansion which has been in his family for generations. What precipitates the telling of his story, and simultaneously stirs him from years of self imposed solitude is the arrival of two entities, both of which are obliquely related to him by varying degrees of separation.

The most unfamiliar element in the equation goes by the name of Michiko Murakami, a Japanese woman of similar age, whom Phillip, though never having met her before, remains convinced that she has for a long time “…been set upon a path that would lead her to the door of my home.” This is because Phillip once heard her name spoken by his long deceased friend and sensei, Hayato Endo, during the very tumultuous years when he came of age; namely the Japanese invasion of Penang in World War II. As a mutual person of interest, Michiko’s arrival instantaneously carries him back to that era.

However it’s his listening to her ‘fill in the gaps’ about the life of this enigmatic ghost from his past which cements the effect. The final impetus to his confronting the memories of that period though, is the result of a pair items innocuously presented as gifts; an old katana and a letter, written by Endo in 1945, which had only recently reached Michiko prior to her meeting Phillip. So, with all these seemingly random, but related set pieces in the appropriate positions, Phillip Hutton, “…gently unfolded” his “life, exposing what was written, letting the ancient ink be read once again.”. Thus begins a story in which the action, save for those occasional key intervals in the tale where both the elderly narrator and the reader might require a quick break to refresh themselves, principally occurs during those six years of the war.

Now, I’ll admit that the aforementioned story-telling mode is fairly effective for this type of narrative, and the connection which Eng establishes with the reader, through Michiko, is accomplished so deftly that one could literally imagine Phillip Hutton as a real person. By the end of this novel I could feel his pain, loss and identify with his moments of anxiety and ambivalence in having to choose between his loyalty to friends and greater causes, which in his case, is defending his family and the country he called home. I could even empathize with the sense of grief and alienation he often experienced when, despite having the best of intentions, every completed action made him feel like he was being hurtled along the road to hell.

There remain certain elements in the story however, which reminded me that although this is eloquently composed fiction, by a very capable writer, it is still a debut novel. My first grouse is with the coalescing of those parts which introduce Phillip in his teenage years. Whenever you do read Gift you may beg to differ with me, but in hindsight, I was left with a sense of contrivance in how Eng attempted to weave together the circumstances of Phillip and Michiko’s initial encounter. I’ll admit, stranger things have happened than a mailed package meandering around Asia for more than four and a half decades, but the plausibility of the prospect produces a strain which could break that aforementioned ancient katana.

Another feature that I found equally double edged was the presentation of genders in this debut. Having studied and read my fair share of works across cultures from the bildungsroman genre, it was a welcome change to observe a young man’s transition from youth into adulthood, facilitated no less by his exposure to a martial art, in this case aikido. Even the treatment of the growth of the father-son relationship is handled in a way that, like Phillip Hutton, I could imagine myself echoing his observation about “the best of fathers” who endure their sons’ “callousness with dignity and silence”. As the novel progressed however, I began to notice a pattern; almost every critical relationship in Eng’s book is distinctively male. Be it Phillip and Kon, a fellow student of aikido, training partner and friend, Phillip and his father Noel, Phillip and his grandfather, and the most profound, Phillip and Endo.

I’m not saying that there’s a dearth of female characters, some of whom, like Phillip’s sister, Isabel, and his Aunt Mei, are drawn in a relatively satisfying manner. Yet the reality is that as figures in this work, they don’t seem to exist in their own right, but are merely supporting characters in the drama of Phillip Hutton’s life, and only gain significance when they assist him in discovering a key facet about himself. The female relationships in Gift are thus often tenuous, strained, and too often the female member met a tragic end.

Furthermore, there’s a specific white elephant in the room that needs to be acknowledged, and that is the relationship between Phillip and his sensei. As bonds go, it is indeed one of a very intense loyalty, and the subject of serious conflict, not merely between Phillip’s family, and friends, but also Endo and the latter’s associates. There’s also a fair amount of anguish present between the two characters, so much so that my ‘gaydar’ kept detecting a barely concealed homoerotic vibe to what is shared between the student and teacher.

There are moments where I found that that the two talk and even act like a couple. What’s more, even though Michiko speaks of the romantic affection she had for Endo, and Phillip states that he heard Endo utter her name, I don’t recall it being spoken of by Endo in similar terms. I’d also have never guessed that he had a past love waiting for him from the manner in which he and Phillip would stand near each other, and Endo would occasionally caress Phillip’s face, or another seemingly innocuous part of his anatomy. There’s one scene in the work, where Eng has Endo rubbing Phillip’s bruised muscles after a particular vicious round of training at the Japanese consulate that is rendered in such a tender tone, that were it not for the imagined scent of liniment, you could expect the moment to proceed in a particular fashion.

Admittedly the author never has a physical consummation of this intimacy occur, seemingly content to have the two circle each other, bound by their duty to family, country and the tenets of aikido. It’s an ambiguous portrayal that, alas, could leave parties on either side of the gay/straight divide feeling equal parts unsatisfied or uncomfortable with the writer, wishing he didn’t vacillate.

Rest assured though, these identified objections to The Gift of Rain ultimately do not detract from the work being a most noteworthy debut. Eng is at his absolute best when illustrating his natural environment, and I recommend that future readers look out specifically for his description of a boat ride Phillip takes with Michiko to observe fireflies. Also, when incorporating the key moments of Penang’s history during that era into the narrative, Eng doesn’t allow himself to get carried away. He is also adept at capturing the capriciousness of the time, both for many of the key characters, and also that of the ordinary citizens, none of which is presented quite so well as the fate which befalls an elderly piano teacher.

Ultimately, I could see this work resonating with both those who have never had a father figure in their life, while making those who did, remember the pleasant and less pleasant moments of growing up. The colonial subject will identify with both the personal and national feelings of abandonment, especially at critical moments in the experiences. Phillip Hutton’s story also speaks to the fact that personal alienation touches both the affluent as well as the impoverished. In the end, I, like Phillip didn’t gain a full appreciation for his ‘gift’ until the close of the work and I wouldn’t want to spoil the epiphany for anyone. Just know that when the revelation arrives and you turn the final page, the denouement will feel, in a word, gifted.

Duane Allicock hails from the island of Trinidad and lives for reading, cycling and running; in that order. When not pursuing any of these passions, he prefers to immerse himself in listening to music, or the silence of the Mount Saint Benedict monastery, pondering on life’s humorous ironies. 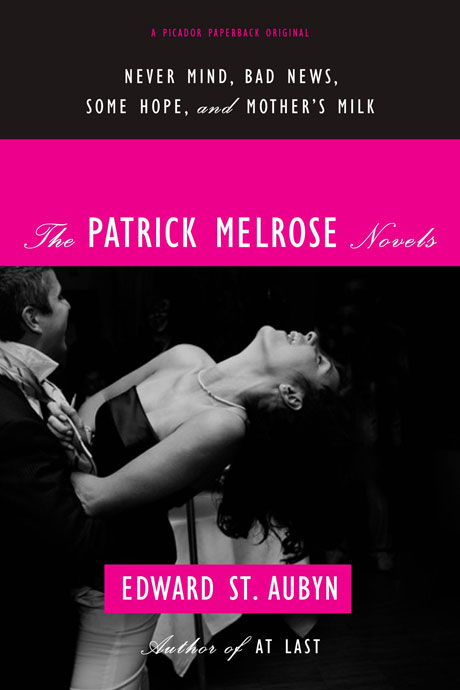 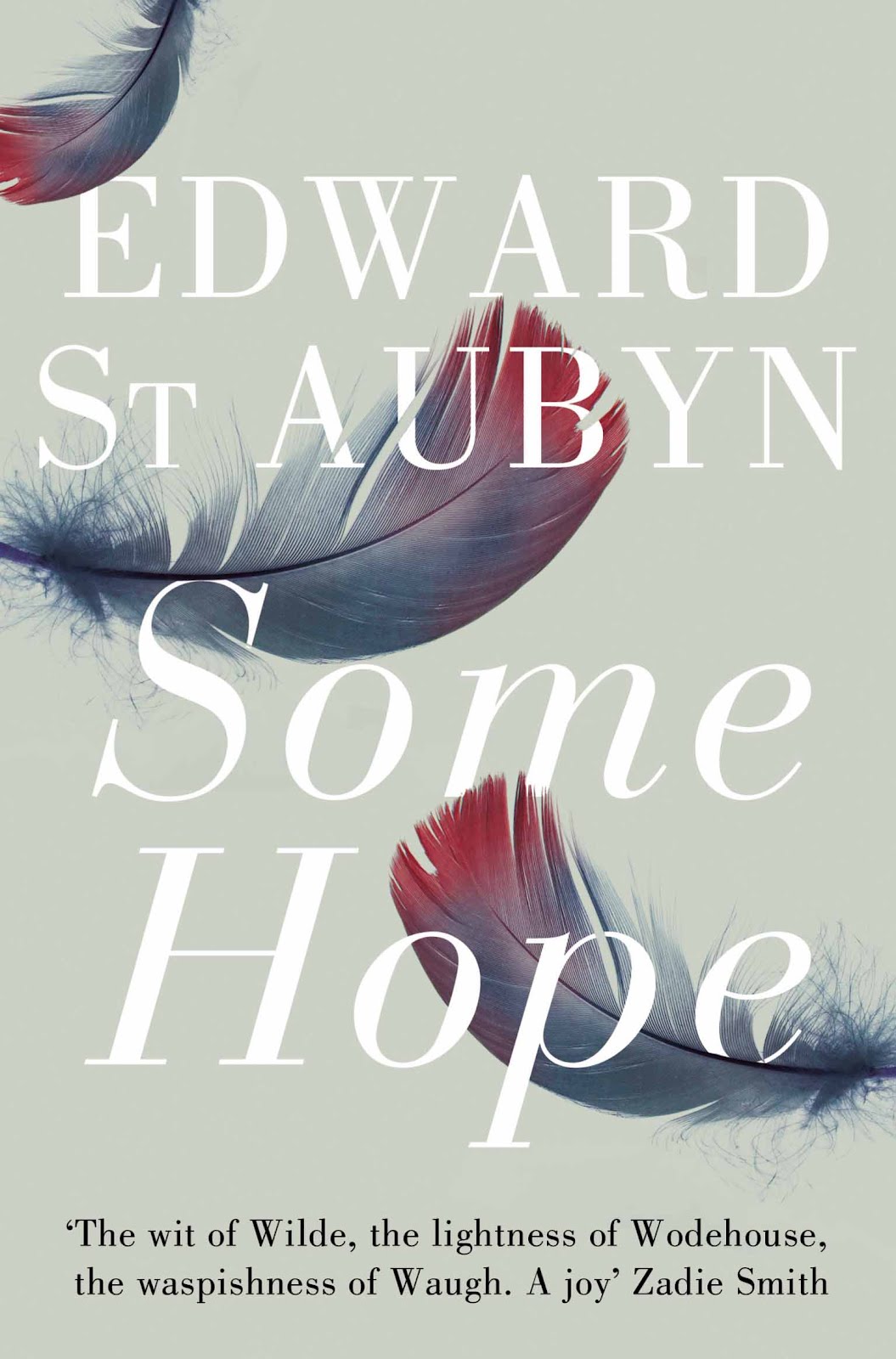